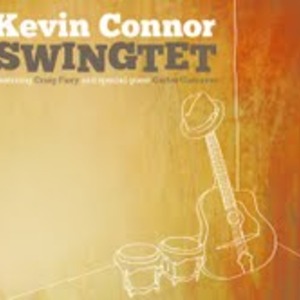 Guitarist, Tresero and composer Kevin Connor is a principal composer and arranger for the SuperSones a 7 piece Cuban Son band as well as the fiery Gypsy Jazz ensemble Hot Club Sandwich. His compositions have been seen on TV and heard on radio nationwide including NPR’s all things considered. He ...

has performed with David Grisman, Dan Hicks, Michael Spiro, and many of todays leading Gypsy Jazz players. With his new Swingtet, he has composed 11 new songs with an emphasis on dance music from the USA and Cuba. Connor has teamed up with Latin Grammy award winning vocalist Carlos Cascante for 3 of the pieces including Cha Cha Cha, Changui, and bolero. The recording and concert will feature his playing on both guitar and Cuban tres and marks his first recording under his own name. The Swingtet will feature Craig Flory on Violin, Jeff Norwood on Bass and JoJo Mascorella on drums along with special guests.

Swinging Down to Cuba: The Kevin Connor Swingtet Hits the Mark

It don’t mean a thing if it ain’t got that swing. It’s as true today as it when Duke Ellington wrote the song in 1931. For the Kevin Connor Swingtet, led by composer, guitarist and tresero Kevin Connor, they’re words to live by, and they prove it on their debut CD, Guitar and Tres (release March 18th, 2014). From Gypsy Jazz to Cuban Son, it’s music to set the feet tapping and couples twirling round the floor.

It swings indeed, but this is your grandparents’...

It don’t mean a thing if it ain’t got that swing. It’s as true today as it when Duke Ellington wrote the song in 1931. For the Kevin Connor Swingtet, led by composer, guitarist and tresero Kevin Connor, they’re words to live by, and they prove it on their debut CD, Guitar and Tres (release March 18th, 2014). From Gypsy Jazz to Cuban Son, it’s music to set the feet tapping and couples twirling round the floor.

It swings indeed, but this is your grandparents’ swing.

“The rhythm and song structures are rooted in the swing tradition,” Connor explains. “But some of the melodies are more modern. And the three Cuban songs are definitely more modern – clarinet isn’t common in son.”

That Cuban side of Connor’s music is a vital part of his soul and that’s evident in the way he plays the tres, the stringed instrument that’s a bedrock of the Cuban sound. He first discovered it when visiting a friend in New Orleans. But it was when he visited Cuba that he had a chance to experience the music fully. A Licensed Naturopathic Physician, he went to study aspects of the Cuban medical system, and after clinical rotation would go down to Havana’s Hotel Nacional to hear the Son trios play in the grounds. He picked up the tres, took lessons and back in his hometown of Seattle, formed the SuperSones to play the music he’d come to love. They recorded, played across the US and toured Belgium and Holland.

At the same time, Connor was stretching the other side of his musical personality in the Gypsy Jazz group Hot Club Sandwich, and writing much of the material that they played at shows and on disc, working with renowned artists like Dan Hicks and David Grisman. But the real genesis of Guitar and Tres, bringing together all the facets of his musical life, came when Connor was awarded a grant by the Seattle Office of Arts and Culture to develop his compositions.

“I wrote all the tunes in a year. That’s why some of them, like “June Bossa” and “Melancholy April” have months in the title. I wanted it all to be new, I didn’t want to use any of my previous material. I was pretty much composing a tune a month and writing the arrangements.”

He knew the disc would be a coming-out party for himself as a solo artist and he wanted to lead his own band. And so the Kevin Connor Swingtet was born, with himself on both tres and guitar, Craig Flory on clarinet, Joseph Mascorella on drums and Jeff Norwood on bass. For the Cuban outings the band had a pair of very special guests in vocalist Carlos Cascante, a Latin Grammy winner with the Spanish Harlem Orchestra and Pedro Vargas, principal percussionist with the legendary Barbarito Torres of Buena Vista Social Club fame.

“We recorded all the basic tracks in two days,” Connor recalls, “then we overdubbed the percussion and vocals and some soloes.  It was exciting to play with Carlos. He’s originally from Costa Rica he has such a unique voice. He and I collaborated on the lyrics for “Cha Cha Cha Pa’la Lluvia,” “Changüí Para Ti” and “No Más Fútbol.”

But there are also nods to one of Connor’s great heroes, Django Reinhardt, on “Two Finger Waltz,” and a look back in time with “Seattle Charleston” a fresh take on an old dance.

“What I wanted was for it all to be dance music, both swing and son, good for all ages, and completely acoustic music.”

And he’s certainly achieved that with this disc. It’s the achievement of a goal that really began when he first took up guitar at the age of ten, working his way through Americana and roots music to discover swing and jazz. He studied ecology at the University of Michigan, studying his instrument with a private teacher before moving to Washington as a spotted owl hooter. While pursuing his qualification in Naturopathic Medicine he continued to play music. These days, between his twin vocations he keeps up a demanding schedule, with music on TV and radio, while his composition “Gaucho” has been featured on NPR’s All Things Considered. But it’s one that he loves. And, it turns out, his music appeals across the generations.

“My dad played harmonica and my parents were always singing and dancing to the swing classics. They were incredibly pleased I came back to their music,” he laughs.

But they all understand. Guitar and Tres has that swing, and that means everything.